Assam Chief Minister Sarbananda Sonowal on May 14 met several top officials of the Vietnam government and discussed economic and other bilateral issues to boost agriculture, trade and commerce in Assam. He was accompanied by Assam’s Agriculture Minister Atul Bora and 13 MLAs during the meetings. 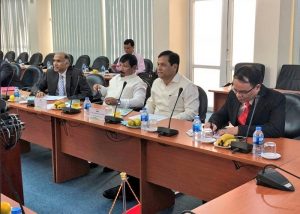 Sonowal, during his discussions with the Vice-Chairman of Central Economic Commission Cao Duc Phat, requested him to take steps for setting up a Consulate Office of Vietnam in Guwahati and organising cultural and youth exchange programmes.

During his meeting with the Chairman of External Relations Commission Hoang Binh Quan, Sonowal mentioned about the thrust given to the north eastern region of India by Prime Minister Narendra Modi through Act East Policy and the infrastructural advancements made in recent years.

He also emphasised on strengthening connectivity between Hanoi and Guwahati to promote tourism and trade.

Assam at the heart of Act East Policy: Governor

Change in Bus routes in Kamrup(M) for LS Polls

No dilution of lockdown in Assam: Patowary

Assam Police Help Line for those who struck outside